“Troublesome Trucks won't be half as much fun!”
―Henry[src]

Spring Special is a magazine story.

One spring day, the birds are singing as Henry is coupled to his school train carriages. When he arrives at the school, one of the children tells him that Bertie is coming to take them on a special spring tour. Henry's next job is a goods train which he knows will not be as much fun and he sets off to the yard.

Henry has not gone far before he sees Bertie parked in a lay-by. Bertie's driver calls out to Henry and Bertie honks urgently. Henry stops at a nearby signal and Bertie explains that he has broken down and that he should be at the school. Henry has an idea and races off. His first stop is the garage where he asks the manager to give Bertie a tow with the breakdown truck. The Breakdown Lorry soon arrives at Bertie's lay-by, but the bus is still concerned. Bertie knows that he will not be repaired in time to take the children on their tour. Henry offers to take the children on the tour himself.

Henry is very excited to have such a pleasant job. He takes the children past fields of newborn lambs and colourful flowers. The children draw some pictures before Henry takes them back to the school. The next morning, the children show their pictures to Henry before they are put in the station waiting room. Henry agrees that the pictures will make spring extra special for the passengers. 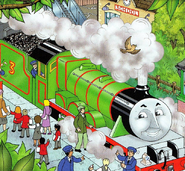 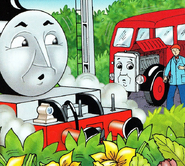 Add a photo to this gallery
Retrieved from "https://ttte.fandom.com/wiki/Spring_Special_(2013)?oldid=1493739"
Community content is available under CC-BY-SA unless otherwise noted.