“Well, this might be my last trip, but I'll get the children to the boat on time.”
―Gordon

Squeak, Rattle and Roll is a magazine story, it was illustrated by using photographs from the television series.

One day, Diesel tells Gordon that steam engines are slow and the Fat Controller is going to scrap them all. Gordon does not believe it; he is still fast as ever.

Later, Gordon starts to make weird squeaking noises. Gordon begins to realise that he is getting old and the Fat Controller might scrap him after all. Gordon trudges up his hill and learns that the squeaking gets quieter the slower he goes. So, Gordon decides to move slowly.

Later, the Fat Controller arrives to talk to Gordon. He tells the big engine that he is going to take some children on a boat trip and Gordon is to take them to the harbour. The boat leaves at nine o'clock sharp so he must not be late.

The next day, Gordon is worried; he wants to go fast to get the children to their boat, but if he speeds up, the Fat Controller might hear the squeak and scrap him. The Fat Controller is confused as to why Gordon is going so slow. Gordon reaches a decision. He decides if this is his last trip, he will make sure to get the children to the harbour on time. So, Gordon speeds up and squeaks all the way to the harbour.

When they arrive at the harbour, the Fat Controller thanks Gordon and tells him that he must go to the works to have the strange noises looked at. The Fat Controller then assures Gordon that he would never scrap the fastest engine on Sodor and Gordon beams with pride. 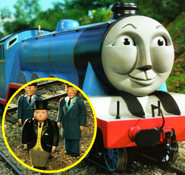 Add a photo to this gallery
Retrieved from "https://ttte.fandom.com/wiki/Squeak,_Rattle_and_Roll_(magazine_story)?oldid=1769934"
*Disclosure: Some of the links above are affiliate links, meaning, at no additional cost to you, Fandom will earn a commission if you click through and make a purchase. Community content is available under CC-BY-SA unless otherwise noted.