“Now we have music while we work!”
―Thomas[src]

Station Sounds is a magazine story.

The Thin Controller and his family have been on holiday and Thomas is given the job of collecting them from the airport. When they arrive, Mr. Percival has a surprise for Thomas - a loud sound that comes from a long horn. Mr. Percival explains that the instrument is called an Alp and he bought it whilst in Switzerland. The Thin Controller goes on to say that the reason he purchased it was as a special attraction for the passengers who use the little railway. A few days later, when passengers arrived at Top Station, they are greeted by a musician playing the Alp horn. 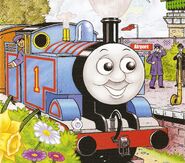 Add a photo to this gallery
Retrieved from "https://ttte.fandom.com/wiki/Station_Sounds?oldid=919696"
Community content is available under CC-BY-SA unless otherwise noted.