Steam on Stamps is a magazine story.

James is annoyed. He is stuck pulling trucks of coal and ash which are making him filthy. Tom Tipper arrived at the station with letters for the Fat Controller. He told James that there was going to be a special Sodor stamp. James is determined he will not be on it looking as filthy as he does. Then Emily races through the station with the express which only adds to James' annoyance. A man comes running; he had missed the train and had an important meeting to attend. James offers him a lift in his brake van, which the Fat Controller agrees to. Soon James catches up with Emily who was running out of puff on Gordon's Hill. James kindly gives her a push and they're soon over the top.

A few weeks later, Tom Tipper arrives with another letter. There was a new Sodor stamp on the envelope which depicts James. It turns out that the man James had helped was the postmaster who chose James for being really useful! 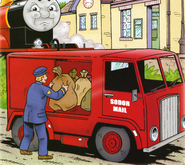 Add a photo to this gallery
Retrieved from "https://ttte.fandom.com/wiki/Steam_on_Stamps?oldid=1236226"
Community content is available under CC-BY-SA unless otherwise noted.