Thomas the Tank Engine Wikia
Register
Don't have an account?
Sign In
in: Magazine stories, Magazine and Annual adaptations

“Maybe next time you should be in charge!”
―Thomas to Kevin

One day, Victor is going away to do another job and Thomas takes over for him at the Steamworks. Before leaving, Victor gives Thomas plenty of instructions to follow, but the tank engine is too excited to listen.

That afternoon, Spencer puffs into the Steamworks. Before waiting to hear what is wrong with the silver engine, Thomas orders him to be put on the hoist. Both Kevin and Spencer are confused, but Thomas will not listen to them. Just then, Henry wheeshes in coughing and spluttering. Thomas immediately decides that the problem must be with Henry's coal. Next, James rolls in with a blocked funnel. Instead of just cleaning it, Thomas thinks he should have a new one fitted.

Kevin is worried; Henry is still spluttering and Spencer is still on the hoist. The crane is so confused that he presses a button on the hoist which lifts Spencer up. Then Kevin drops some coal near Henry, making him sneeze. This causes Henry to biff into James who puffs out a big cloud of thick black smoke, just as Victor returns. Thomas is very sorry; he realises that he should have listened.

Soon Spencer is painted, Henry's firebox has been cleared out and James has his funnel emptied and polished. Afterwards, Thomas thanks Kevin for all his hard work and suggests that next time perhaps the little crane could be in charge, which makes Kevin blush right down to his hazard stripes. 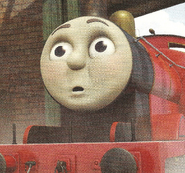