King of the Railway (T&F)

Stephen, nicknamed "The Rocket", is an early steam engine who works at Ulfstead Castle, where he takes visitors around the castle grounds and across the rest of Sodor.

Stephen was built in 1829 by Robert Stephenson and competed in a series of races called the Rainhill Trials against four other engines, which he ended up winning at. He used to work in mines and at harbours, but as newer and faster engines were being built, Stephen was abandoned until he was uncovered by Sir Robert Norramby and brought back to Sodor, where he was overhauled at the Sodor Steamworks.

Norramby had Stephen restored so that he could take tourists around the castle grounds; however, Stephen was not aware of this and after being told by Thomas that the Earl had a surprise job for him, became too excited to wait and travelled around Sodor, looking for jobs that he could do. However, Stephen proved to be too weak and slow for most of the jobs and after visiting an abandoned mine, became trapped after having to avoid a runaway train from running into him. While he was in the mine, Stephen managed to uncover King Godred's long lost crown and after being rescued, he was given a new funnel and was present at the grand opening of Ulfstead Castle.

When James was trying to scare Percy, Stephen accidentally fell into the moat at the castle when he became scared by one of James' tricks. He and Percy both had the last laugh after they successfully frightened James. Later, when Percy was having a day of bad luck, Stephen gave him his lucky horseshoe to help him feel better, but Percy lost the horseshoe before he could leave the castle. He was later chosen to collect the ingredients for the Earl's afternoon tea, but Spencer was teasing Stephen for being too slow, so Stephen tried to prove Spencer that he can be fast, but due to this, Stephen spilled the barrels of jam when he came into the castle too fast. Fortunately, Stephen managed to amend his mistake by having the afternoon tea on a train around Sodor, which proved to be popular.

When the Earl was expecting a shipment from the Mainland, both Stephen and Millie waited for the shipment to arrive, when they saw Marion running away from the dinosaur models that Samson was delivering, which turned out to be the Earl's important shipment.

Once, as he was taking tourists across the island, Stephen noticed that the Sodor Suspension Bridge was falling apart. He got his passengers to safety, then managed to stop Gordon and the express from crossing the bridge, seconds before the bridge collapsed.

After the party that was held at Ulfstead Castle after Glynn's restoration, Stephen became jealous of Glynn because he believed the Earl had a new favourite engine. He later challenged the coffee pot to a race to Knapford Station. The race ended in a tie and Sir Topham Hatt was upset with the delays the two had caused on the Main Line due to their slow race. However, the Earl had agreed to the race with Sir Topham as promotion for the new railway museum he was opening. Both engines then became friends and would be star attractions at the museum. Stephen also helped Connor gain confidence in racing and be bang-on time by giving him a pep talk after he refused to race him due to fear of breaking his coupling rods again.

When the Great Railway Show was being held on the Mainland, Stephen was taken to the show along with the other Sudrian engines who would be competing. He took a Brass Band and other visitors around the railway show yard as the show was taking place and led the Best Decorated Engine Parade.

Later on, when Millie had been given extra work, the Earl asked Stephen and Glynn to help out for the day. However, Stephen neglected to do his assigned chore of moving the garden waste. Fed up, Millie tried to pay Stephen back by dumping the waste in front of his shed - Stephen took offence to this and mocked Millie in retaliation, prompting her to race off in a huff. The following day, Stephen became increasingly concerned when he could not find Millie, and came to the conclusion that she had run away because of his teasing. Determined to set things right, Stephen left the estate to look for Millie, only to run out of water near Crovan's Gate. Shortly afterward, Millie and the Earl found him, and explained that they had only left to collect a new motor for the castle turntable - the Earl had in fact told both Stephen and Glynn about this the previous morning, but because the two were so busy bantering, they did not hear him. Millie and Stephen resolved their misunderstanding, and, once Stephen had taken on more water, returned to the castle together.

Toby later filled in for him when he was at the Steamworks.

Stephen is a jolly old engine with a positive attitude and a good sense of humour. He is a good-hearted and quick-witted engine and will not take any nonsense from engines like Spencer or Diesel. Some of the smaller engines look up to him for advice and he is always willing to get the job done.

Stephen is based on Stephenson's Rocket. Though his design is based on a combination of the Rocket as originally built (such as angled cylinders) and its post-Rainhill modifications (such as a smokebox), Stephen has identified himself as the original Rocket, describing the Rainhill trials and his subsequent working years.

The real Rocket is preserved at the Science Museum in London, although it is currently on display at the National Railway Museum at York. Several replicas also exist, one of which is part of the National Collection. 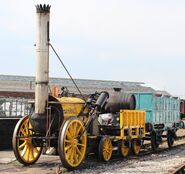 Stephen's Basis
Add a photo to this gallery

Stephen is painted golden yellow and black. He carries gold nameplates reading "Rocket" on each side of his boiler and his domes, whistle, exhaust pipes and boiler bands are painted bronze. During his early years and after his overhaul, Stephen had a plain black funnel, but after he was rescued from the mine, his funnel was painted white with a gold finial.

Prior to being overhauled, Stephen had unpainted woodwork with black wheels. Due to being abandoned for so long, he was covered in patches of rust, and his wood was rotting.

“Did you ever see knights in shining armour?"
"No! I may be old, but I'm not that old! And before you ask, I never saw dinosaurs either!”
―Percy and Stephen discussing the latter's age, "King of the Railway"

“The visitors will wait a long time for their afternoon tea if Stephen is doing the job."
"I'll have you know they use to call me the Rocket, because I was so speedy!"
"Pah! Compared to a horse and cart maybe!”
―Spencer insulting Stephen, "The Afternoon Tea Express", seventeenth series

“Looks like someone is back to her old self."
"Yes, Marion certainly isn't scared of dinosaurs anymore. In fact you could say she really "Digs" them!”
―Millie and Stephen talking about Marion, "Marion and the Dinosaurs", eighteenth series

Ulfstead Castle
Retrieved from "https://ttte.fandom.com/wiki/Stephen?oldid=1724106"
*Disclosure: Some of the links above are affiliate links, meaning, at no additional cost to you, Fandom will earn a commission if you click through and make a purchase. Community content is available under CC-BY-SA unless otherwise noted.