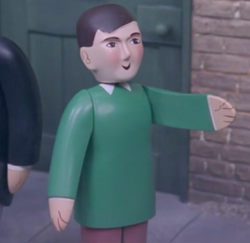 Stephen Hatt is the grandson of Sir Topham Hatt and the brother of Bridget Hatt. While in the Television Series he remained depicted as a child, in the Railway Series he eventually grew up to become the current Fat Controller.

Did you Know? Sir Stephen Topham Hatt III is the third Fat Controller to run the North Western Railway.

Stephen Hatt
(Thomas & Friends)
(1984-2021)
*Disclosure: Some of the links above are affiliate links, meaning, at no additional cost to you, Fandom will earn a commission if you click through and make a purchase. Community content is available under CC-BY-SA unless otherwise noted.
Advertisement