Stepney's Branch Line (also known as The Bluebell Railway in some of the classic series episodes) runs from north of Crovan's Gate to Great Waterton. Due to a vast amount of bluebell flowers beside the tracks, the line is nicknamed the "Bluebell Railway".

Stepney and possibly Flora, are currently the only locomotives known to work on this line; however, Thomas has been seen travelling up and down it numerous times and other North Western Railway engines sometimes use this line to get to Great Waterton instead of using the Main Line.

The line begins north-east of Crovan's Gate, at the Transfer Yards on the Norramby Branch Line and travels up to the Skarloey Railway Depot and Mr. Percival's House, where it runs next to the Skarloey Railway until it splits at Bluebell Valley Station. The two lines reconverge to go through two parallel tunnels, before the branch line splits up at a junction with one line going to the Rolling River Bridge and the other running past Green Hills Junction until the line finally stops at Great Waterton at a spur of the Main Line. 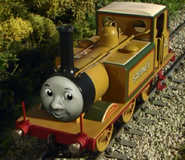 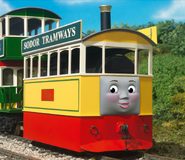 Flora
Add a photo to this gallery 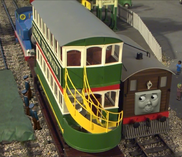 Flora's Tram Coach
Add a photo to this gallery

The Water Works
Add a photo to this gallery
North Western Railway
* RWS only | ** T&F only | --- Dropped
Stepney's Branch Line
Retrieved from "https://ttte.fandom.com/wiki/Stepney%27s_Branch_Line?oldid=1713309"
*Disclosure: Some of the links above are affiliate links, meaning, at no additional cost to you, Fandom will earn a commission if you click through and make a purchase. Community content is available under CC-BY-SA unless otherwise noted.