“Hooray for Rosie's rocks!”
―Everyone cheers

Stone Signal, republished as Rosie's Rocks in 2011, is a magazine story.

Mavis is away at the Works, so Rosie is running her quarry line. Rosie is bringing large rocks to the beach to help build a wall to hold back the high tides. Rosie chugs back to the quarry to collect more rocks, but when she does not return to the beach, the workmen are worried. They ring the Sodor Search and Rescue Centre and soon Harold's soaring through the sky looking for Rosie, but he cannot see the little engine anywhere. Unbeknownst to Harold, this is because Rosie has stalled inside a tunnel. Rosie is worried that she will never get rescued until she gets a great idea. Her crew takes large rocks from her trucks outside.

Soon, Harold flew by again. Suddenly, he saw the rocks in a field below. The rocks spell out the word HELP. Harold fetches Harvey and soon Rosie is rescued - all thanks to Rosie's rocks. 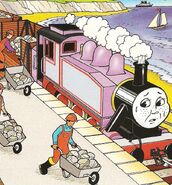 Harvey and Rosie
Add a photo to this gallery
Retrieved from "https://ttte.fandom.com/wiki/Stone_Signal?oldid=1732616"
*Disclosure: Some of the links above are affiliate links, meaning, at no additional cost to you, Fandom will earn a commission if you click through and make a purchase. Community content is available under CC-BY-SA unless otherwise noted.