Stop, Thief! is a magazine story.

One day, Edward hears the Fat Controller tell the stationmaster that he has left his watch and Lady Hatt's necklace in his office.

Later, Edward sees a man walk into the office and take the jewellery. The man quickly jumps aboard Emily's train just before it departs. Edward demands the thief to stop, but it is too late. Emily steams out of the station with Edward chasing after her and the jewel thief. Edward struggles to keep up until Emily has to stop at a signal which has failed. Edward pulls up close behind Emily and his crew climb down from the cab. Armed with a description of the thief, Edward's driver goes to find the man.

Emily's guard helps the driver search the carriages until they find the man sitting in the very last one. The guard demands that the man hand over the jewellery immediately. The man is shocked and says that he can explain. 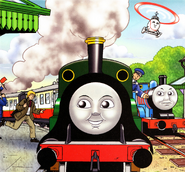 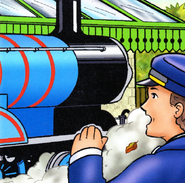 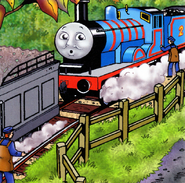 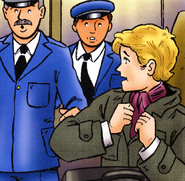 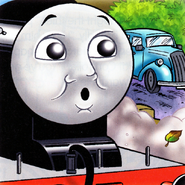 Add a photo to this gallery
Retrieved from "https://ttte.fandom.com/wiki/Stop,_Thief!?oldid=1245040"
Community content is available under CC-BY-SA unless otherwise noted.