“Tortoises are too slow to go on foot!”
―Thomas' driver

Story Time with Thomas is a magazine story.

One day, Thomas picks up a very tired zookeeper. He explains that although it is his day off the following day, he will not get a rest because it is his son's birthday. The next day, Thomas is surprised to see two boys on the platform with some stick insects and a weasel. They tell Thomas that they are going to a pet party.

At a small countryside halt, Thomas spots a boy on the platform with a goat and a bucket. The driver thinks the boy is about to milk it, but the boy leads the goat onto Clarabel. Annie and Clarabel are not very pleased about being filled with animals. At the next stop, Thomas sees a girl with a goose. The stationmaster tries to check the girl's ticket, but the goose chases him along the platform. Later, Thomas sees a boy at a station with a tortoise. At the next station, there are even more animals. One boy has a dog which barks at Thomas. A boy's parrot then starts to copy the dog. Thomas also sees a cat in a basket. He instructs the boy and his dog to board Clarabel and the girl and the cat to go in Annie, as to avoid any fighting.

Finally, the children and their animals get off the train at a station. Thomas remarks that all the animals will need a zookeeper. It turns out that the zookeeper who has boarded the train the day before was there. He escorts the animals and the children from the platform to his nearby garden. It becomes apparent that it is his son who is holding the pet party for his birthday. 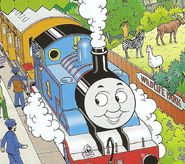 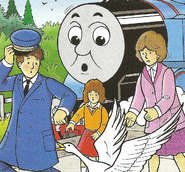 Add a photo to this gallery
Retrieved from "https://ttte.fandom.com/wiki/Story_Time_with_Thomas?oldid=1671737"
*Disclosure: Some of the links above are affiliate links, meaning, at no additional cost to you, Fandom will earn a commission if you click through and make a purchase. Community content is available under CC-BY-SA unless otherwise noted.