“Let our passengers through!"
"Stop making that awful racket!"
"We won't till we've repaired the road. It could take ages! Roads must come first. Rip up the railways is what I say!”
―Arthur, Harvey and George

Stranded is a magazine story.

One morning, the engines are awoken by a loud noise. They roll into the yard to investigate and find workmen drilling. The roadworks are just outside the station entrance and passengers are having trouble getting past them to catch their trains. Harvey and Arthur tell George and the workmen to let their passengers through and keep the noise down, but George is less that co-operative. Suddenly, a drill burtsts through a water pipe by mistake and water gushes high in the air.

It is not long before the station's entrance is completely flooded and the station has to close. Bertie delivers the engines' passengers instead. George thinks the engines are being fussy; a drop of water will not do any harm. The water soon rises around George's roller and he begins to change his attitude. George tries his best to escape the water by rolling into the station car-park, but that is flooded too. Then, George slips into a ditch beside the yard. He is well and truly stuck. Harvey rushes to the rescue. Slowly, he manages to lift the heavy steamroller onto dry ground. George is wet and muddy, but very relieved.

Meanwhile, workmen finally turn off the water main. As the water drains away, the workmen and engine crews all cheer for proud Harvey. For once, George is sorry for saying unkind things to the engines. The grateful steamroller promises to get the road mended as quickly as possible. Harvey jokingly tells George to admit that he would have been sunk without the engines. 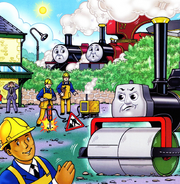 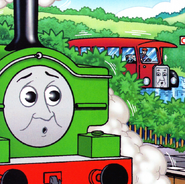 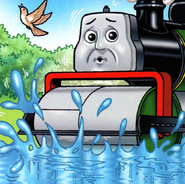 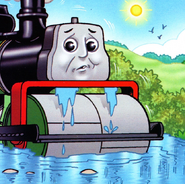 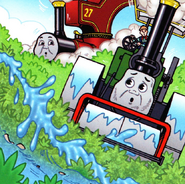 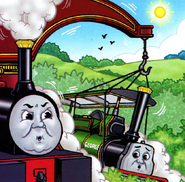 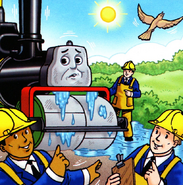 Add a photo to this gallery
Retrieved from "https://ttte.fandom.com/wiki/Stranded?oldid=1237133"
Community content is available under CC-BY-SA unless otherwise noted.