Strange Sounds is a magazine story.

One dark winter night, Percy clatters nervously towards a long, dark tunnel. As he approaches it, he slows down. His driver assures him that there is nothing to be scared of. Percy puffs into the tunnel and suddenly hears a shrill screeching noise that makes his wheels wobble. Percy thinks it is a ghost, but it is only Duck coming towards him on the next track. Duck explains that he has a wonky whistle which is responsible for the shrill screeching.

Soon Percy arrives at a disused mine and hears a strange groaning noise. Percy is scared, but his driver reassures him, saying that it is just the wind. Percy decides that it would be best not to tell the other engines about the noises; they would only laugh at him.

The next day, Percy has to deliver some trucks to the other side of the Island. It is late as Percy rolls past the castle and an eerie mist hangs over the Loch. Suddenly, Percy hears a mysterious howling noise. Even the driver admits that it sounds spooky. Percy steams onto the main station, where Lord Callan is waiting for a train to take him home. Percy tells Lord Callan that his castle is haunted and explains about the howling noise. Lord Callan is concerned and asks Percy to take him home right away.

As Percy pulls up at the castle, the howl comes again. Lord Callan runs inside and soon returns holding a puppy. Lord Callan introduces Percy to his dog named Dougal. Percy is surprised that a little puppy could make such a loud noise, but most of all he is happy that there are no ghosts on the Island. 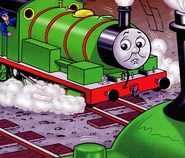 Add a photo to this gallery
Retrieved from "https://ttte.fandom.com/wiki/Strange_Sounds?oldid=1425387"
Community content is available under CC-BY-SA unless otherwise noted.