Suddery is a town on Sodor's south coast that serves as the island's administrative centre. Suddery claims to be a city, having once been the seat of the Bishops of Suddery. Its motto is "Luoc Sodoris Lux" (from Latin: "Luoc, the Light of Sodor").

Tradition has it that the Irish missionary St. Luoc landed from his coracle on the shores of Suddery Bay. In proof of this, visitors to St. Luoc‘s Cathedral are shown in the crypt, the remains of the Keeill, or chapel, which he built for himself on landing. Luoc in the 5th Century was the first Christian missionary to reach Sodor. The city’s Arms perpetuate the legend of his miraculous arrival. They show the saint arrayed as a bishop standing in a coracle and holding his crozier. Below is the city’s motto ”Luoc Sodoris Lux”.

A small church was built on the site in the 10th Century, but work on a Cathedral was begun by Bishop Rolf in 1071, who seems to have preferred it to that inconveniently placed on Peel Island, Isle of Man. Work was continued by his successor Hammond, but it then suffered a long period of neglect and by 1392 was in such a poor state that an appeal, blessed by the Pope, was made to the faithful urging them to give alms "for reparation of the Church of Sodor." Sudrians always maintain that these monies were misappropriated, for instead of being used for their clearly defined purpose - the repair of St Luoc's, Suddery, which is undoubtedly the Church of Sodor - they were diverted to repair the church on Peel Island. A period of "make do and mend" followed with authorities doing what they could with what little monies were available.

Eventually in the 16th Century, with funds released for the purpose by the dissolution of Cronk Abbey, it was restored and rebuilt in Tudor style by the first two Bishops of Suddery, Michael Colden (1540-1565) and Timothy Smeale (1565-1594). It is small as cathedrals go, being perhaps on par with Hereford Cathedral in size, but whereas Hereford has Norman grandeur and solidity, Suddery with its “Tudor perpendicular” has the large windows which give it a grace and lightness all of its own.

As the Capital of the Island, Suddery was fortified, but the castle is relatively late in date. It was built at the end of the 12th Century to fill a gap in the city’s defences after a Manx raiding party had redeemed their failure to enter and loot the city, by making off with several ships. A castle was therefore built overlooking the harbour. It was a Norman type castle with a Keep, and was always held by the City and never by a baron, it was blown up by parliamentary troops during the Great Rebellion, and the shattered masonry slid down into the harbour. The site, a commanding one, was re-fortified during the Napoleonic wars, but the batteries built then have not spoilt its appearance.

The blown-up masonry in the harbour eventually created a bar preventing its use by shipping except of the very smallest draught. Since all attempts at dredging have proved costly failures, the Mayor and Corporation made a virtue out of necessity. If they could not have shipping of one sort they would have it of another. The docks have been turned into a flourishing Marina which draws yachtsmen from all parts, and the Suddery Regatta has been spoken of as the northern counterpart to Cowes.

Suddery was connected by the Wellsworth and Suddery Railway, who hoped to use the town as a port, via rail with Brendam and Crosby in 1870. Following the failure of both Suddery and subsequently Brendam as ports, the railway turned its sights to Tidmouth. Following the formation of the North Western Railway in 1915, Suddery became a station on the Brendam Branch Line. Since the docks cannot be used for any but the lightest traffic, the former rail connection has been taken up, and the station re-sited more conveniently for the City.[1]

In addition to the main Suddery station, the town is also served by the larger Lower Suddery, located in the southern end of the town. Lower Suddery contains a shunting yard, and a flour mill is also located here. The Mayor of Sodor lives here.

Edward outside Suddery in the Railway Series

The Christmas party being held at Suddery 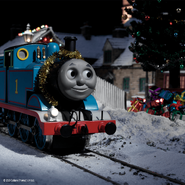 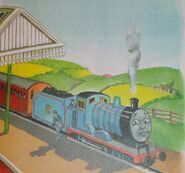 Suddery as depicted in Edward Cracks a Nut 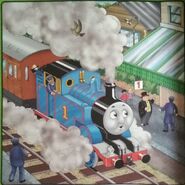 Suddery in a magazine story 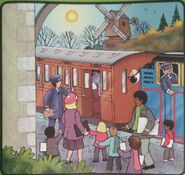 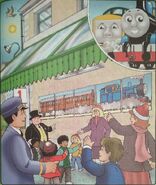 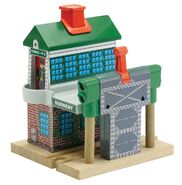 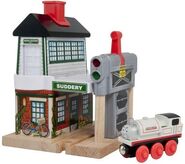 Brendam Branch Line
* RWS only | ** T&F only
Español עברית Polski Русский
*Disclosure: Some of the links above are affiliate links, meaning, at no additional cost to you, Fandom will earn a commission if you click through and make a purchase. Community content is available under CC-BY-SA unless otherwise noted.
Advertisement