Suddery Castle is a ruined castle located near the town of Suddery, overlooking the Harbour.

It is a Norman type castle with a keep, built at the end of the 12th century to fill a gap in the city's defences after a Manx raiding party failed to loot the city but instead stole a number of ships.

It was blown up during the Great Rebellion by parliamentary troops, but was refortified during the Napoleonic Wars. The demolished masonry slid down into the ocean, blocking the access for most boats into the Harbour. Because of this, the Harbour has since been turned into a marina, which has become well-known for yacht traffic and regattas.

In the television series, the castle ruins appeared in the second and seventh series, with a different appearance in each.

The castle in the snow

The castle in the seventh series

Arthur at Suddery Castle
Add a photo to this gallery

Harold flying over the castle 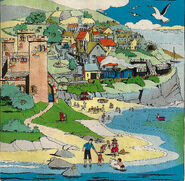 Suddery Castle in a magazine story
Add a photo to this gallery
Brendam Branch Line
* RWS only | ** T&F only
Retrieved from "https://ttte.fandom.com/wiki/Suddery_Castle?oldid=1769147"
*Disclosure: Some of the links above are affiliate links, meaning, at no additional cost to you, Fandom will earn a commission if you click through and make a purchase. Community content is available under CC-BY-SA unless otherwise noted.