East of Wellsworth, Island of Sodor

Suddery Junction, also known as Edward's Junction, is the junction for the Brendam Branch Line, located near Wellsworth and leading to Suddery.

Suddery Junction was once part of the Wellsworth and Suddery Railway. The signalbox here controls entry to and from the branch to Suddery and Brendam.[1] In 1965, the signalman switched Gordon on to the branch as Control at Tidmouth forgot to inform him that Edward was coming through first.

Edward passes through the crossing with Donald and Douglas' worried face 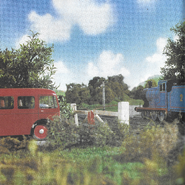 Deleted scene
Add a photo to this gallery 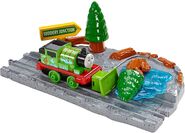 Brendam Branch Line
* RWS only | ** T&F only
Retrieved from "https://ttte.fandom.com/wiki/Suddery_Junction?oldid=1810659"
*Disclosure: Some of the links above are affiliate links, meaning, at no additional cost to you, Fandom will earn a commission if you click through and make a purchase. Community content is available under CC-BY-SA unless otherwise noted.