“Am I dreaming or is there some kind of fancy-dress party going on?"
"Holy hatstands, Thomas, haven't you heard about the Elsbridge Carnival?”
―Thomas and Tigerwoman and The Fang

Super Heroes! is a magazine story.

One sunny morning, Thomas chuffs sleepily into the main station where he is surprised to see a group of people in colourful costumes. Thomas thinks he is dreaming until "Tigerwoman" and "The Fang" explain that the theme at the Elsbridge Carnival this year is superheroes. All of the costumed passengers board Annie and Clarabel including the infamous "Webman".

Thomas soon stops at the Airfield and is surprised to see Webman get off the train. Webman walks over to Harold who has been dressed up to resemble Webman's helicopter. Harold is just about to take off with Webman when he receives an emergency call. Two policemen climb into Harold and explain that they need Harold to help with a jewel robbery.

Harold flies over the countryside and soon spots the thief's stolen van. Suddenly, the van grinds to a halt and the thief sprints across the fields towards some woods. Harold homes in on the thief and Webman has a grand idea. He offers his web to the policemen. Moments later, Harold lands and the web had worked perfectly; the jewel thief was trapped. The jewel thief surrenders just as a man from the Sodor News turns up with a camera. 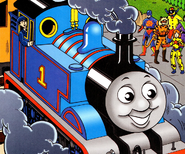 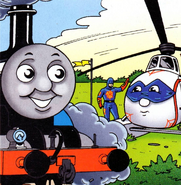 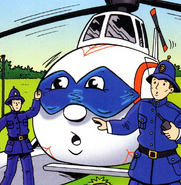 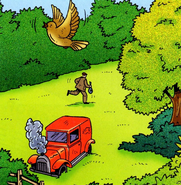 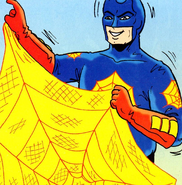 Add a photo to this gallery
Retrieved from "https://ttte.fandom.com/wiki/Super_Heroes!?oldid=978762"
*Disclosure: Some of the links above are affiliate links, meaning, at no additional cost to you, Fandom will earn a commission if you click through and make a purchase. Community content is available under CC-BY-SA unless otherwise noted.