“Thanks, Thomas! This is the best Winter Holiday Party of all!”
―Percy and Edward

Thomas is looking forward to the Sodor Winter Holiday Party, but his friend Percy has broken a coupling rod and will not be able to attend. As Thomas shunts Percy to the Sodor Steamworks, Thomas finds Edward who has also broken down. Thomas delivers Percy to the Steamworks and then goes back to fetch Edward.

Back at the Sodor Steamworks, Victor is not happy; there is no way he can fix the two engines in time for the party. Thomas has an idea and decides that if his friends cannot go to the party, he will bring a party to his friends. Thomas sees that Victor looks busy and decides to organise the party all on his own.

Soon, Thomas meets up with Charlie who tells him a joke. Thomas asks if Charlie can tell some jokes at the Steamworks party later on. Unfortunately, Thomas laughs so hard that he rolls backwards into Charlie who derails. Thomas goes to find Rocky at the docks. When he arrives, Thomas finds Rocky unloading Christmas tree crates. Thomas asks if they can have a tree for the party. Rocky is confused as they set off to rescue Charlie.

When they all arrive at the Steamworks, they find the place in chaos. Kevin is bumping into things and Victor looks more unhappy than ever. Thomas finally shares his idea about Victor, who agrees that a party sounds like a great idea. Victor helps by delegating jobs. Kevin lifts up the tree and Rocky puts a star on top. The workmen hang up bright lights as Edward and Percy whoop with glee; they think it is the best Winter Holiday Party ever. 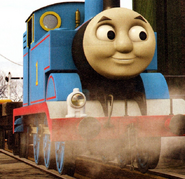 Add a photo to this gallery
Retrieved from "https://ttte.fandom.com/wiki/Surprise,_Surprise!_(magazine_story)?oldid=1438018"
Community content is available under CC-BY-SA unless otherwise noted.