English
Surprise Adventures is an audiobook released in 1998 by MCI on cassette in the UK. It was later rereleased in 2000 by ABC Music and EMI on cassette and CD in Australia. It features all ten songs from Series 5, along with a story written by Alec Reid and narrated by Michael Angelis.

Thomas' adventures began one winter when the mail arrived late from the mainland. Very soon, he was helping Harold the Helicopter with a daring rescue. As you listen to this brand new story, you will discover you can have fun joining in with ten songs about Thomas and his friends.

The engines are resting after Christmas but more work needs to be done. The Fat Controller explains to Thomas that the Christmas mail is delayed and that he and Percy are to take it. However after a rather silly accident involving Percy, Thomas is to take all the mail, leaving him puffed out the next morning.

Thomas is ready for work again and on the way he explains to Percy that he will soon be rescued. As he is working he discovers Donald's duck, Dilly, who is stranded on the ice and cannot move due to an injured wing. However, Harold comes to the rescue, and Thomas and friends look after her, despite her nonstop quacking.

Spring soon arrives, followed by Summer. Thomas is needed to take seven coaches to Gordon, but Thomas needs help and Bill and Ben are the only engines left. In the end, the Fat Controller agrees that Bill and Ben can help. 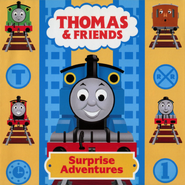 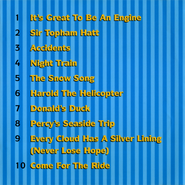 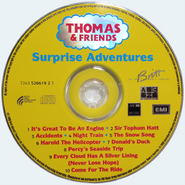 Australian CD
*Disclosure: Some of the links above are affiliate links, meaning, at no additional cost to you, Fandom will earn a commission if you click through and make a purchase. Community content is available under CC-BY-SA unless otherwise noted.