T. Drysdale Signwriter is a sign writing and painting company on Sodor. The company is named after its owner, Mr. T. Drysdale.

Mr. Drysdale drives a green van which carries all the supplies needed for his jobs.

The signwriter's van is based on the Morris Commercial J-type van, built between 1949 and 1961. Post Van and Sodor Bakery Van share the same basis.

The signwriter's van is painted fluorescent green with the company's detail painted on the sides in white. 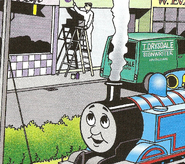 The Signwriter's Van's basis
Add a photo to this gallery
Non-rail vehicles
* RWS only | ** T&F only | *** Other Media only
Retrieved from "https://ttte.fandom.com/wiki/T._Drysdale_Signwriter?oldid=1537573"
Community content is available under CC-BY-SA unless otherwise noted.