“We'll take Toby tonight."
"Yes, it'll be quiet then."
"Puff my pistons! They're planning to steal Toby!”
―The two "thieves" and Edward

Taking Toby, re-published in 2012 as Edward's Big Rescue, is a magazine story.

One day, Edward is acting as a back engine for a long goods train being pulled by Duck. He helps to push it to the docks where Salty tells both engines the story of the time he once saved a ship from being stolen.

Next day, Edward is on his branch line waiting at a signal inside a tunnel by the station. Edward hears the voices of two men nearby. They say that they are going to take Toby that night. Edward assumes that the two men are going to steal Toby and he tries to tell the other engines. They do not take Edward's words seriously and the wise old engine decides to take action himself.

That night, whilst all of the other engines are sleeping, Edward puffs off to Toby's shed to warn him. When he arrives, he is just in time to see Toby disappearing in the distance. Edward bravely decides to stop the thieves himself. Edward puffs onto a loop line and arrives at the junction on Toby's line before Toby gets there. Soon Toby reaches the junction and Edward refuses to budge. It then becomes apparent that the two "thieves" are just taking Toby to the works so that he can be fixed overnight. Edward feels silly, but Toby tells him that it is great to know that he would make a really useful rescuer. 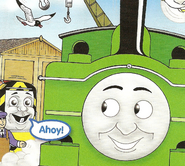 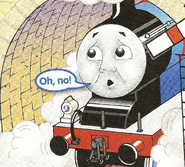 Add a photo to this gallery
Retrieved from "https://ttte.fandom.com/wiki/Taking_Toby?oldid=1732591"
*Disclosure: Some of the links above are affiliate links, meaning, at no additional cost to you, Fandom will earn a commission if you click through and make a purchase. Community content is available under CC-BY-SA unless otherwise noted.