Thomas the Tank Engine Wikia
Register
Don't have an account?
Sign In
Advertisement
in: DVDs, US VHS/DVD releases, Digital Video,
and 3 more

Tales on the Rails

Tales on the Rails

Thomas and his friends are telling tales on the rails! Percy's sheep escape and Den and Dart fear working apart. James can't handle the slip coaches, while Salty's imagination has him running scared. When Percy loses control, he bravely faces his fears with a little help from his friends. Track down exciting stories with Thomas and his friends! 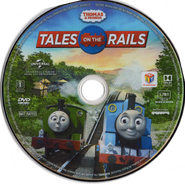 Latin American DVD Bonus Features menu
*Disclosure: Some of the links above are affiliate links, meaning, at no additional cost to you, Fandom will earn a commission if you click through and make a purchase. Community content is available under CC-BY-SA unless otherwise noted.
Advertisement