Talyllyn is Skarloey's twin and his real life counterpart.

Talyllyn was built alongside his twin Skarloey in 1864 by Fletcher, Jennings & Co. at the Lowca Engineering Works. Skarloey was sent to the Skarloey Railway on Sodor, while Talyllyn went to the Talyllyn Railway in Wales. Two years later, he was joined by Dolgoch.

Originally built in 1864 by Fletcher, Jennings & Co. of Whitehaven as an 0-4-0ST, Talyllyn had a short wheelbase and long rear overhang which led to his rapid conversion to a Class C 0-4-2ST. As the more popular of the Talyllyn Railway's two original locos, Talyllyn was in very poor condition by 1945 when he was laid aside. He was rebuilt in 1957-58 by Gibbons Bros. Ltd., but proved problematic and has undergone considerable modification since then, resulting in much improved performance.

In April 2014, Talyllyn's right-hand side connecting rod broke, which resulted into him being sent to the Ffestiniog Railway for the connecting rod to be mended, and a bottom-end overhaul to be carried out at the Boston Lodge Works. In August of that year, Talyllyn returned to service, and on the 24th of September, he celebrated his 150th birthday in grand style alongside Dolgoch. As of 2018, Talyllyn is going through an overhaul due to his boiler ticket being expired. During the overhaul process in 2019, it was revealed that Talyllyn will go back to his green livery.

In his appearances in the Railway Series, Talyllyn is painted in the Talyllyn Railway's Bronze Green livery with black and yellow lining, and brass fittings. He has red and brass name, number and builder's plates on the sides of his cab.

Talyllyn is currently painted Indian Red with black and gold lining, red wheels and "TAL-Y-LLYN" written in light yellow on the sides of his water tank. 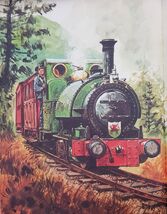 Talyllyn in an annual

Talyllyn with Prince and Russell

Talyllyn in "Railways Restored - Wales Re-visted"
Add a photo to this gallery
United Kingdom
* RWS only | ** T&F only
Talyllyn Railway
Retrieved from "https://ttte.fandom.com/wiki/Talyllyn?oldid=1813327"
*Disclosure: Some of the links above are affiliate links, meaning, at no additional cost to you, Fandom will earn a commission if you click through and make a purchase. Community content is available under CC-BY-SA unless otherwise noted.