West of Lakeside, Island of Sodor

There is a station on the Skarloey Railway where the Refreshment Lady has her Tea Rooms, located west of Lakeside. It is connected to the rest of the railway via the Rocky Ridge Line. There is a small shunting yard at the station.

It first appeared in the seventh series and continued making appearances until the tenth series.

Peter Sam and the Refreshment Lady at the station

Rheneas and Rusty at the station

Duncan and the Fat Controller at the station

Duncan with the Elephant Statue in the sidings at the station

Sir Handel and Mr. Percival at the station in the tenth season 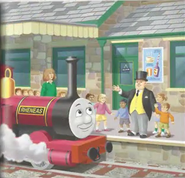 The station in a Story Library book

Abergynolwyn station, the basis for the Tea Room station
Add a photo to this gallery
Skarloey Railway
* RWS only | ** T&F only
Retrieved from "https://ttte.fandom.com/wiki/Tea_Room_Station?oldid=1758815"
*Disclosure: Some of the links above are affiliate links, meaning, at no additional cost to you, Fandom will earn a commission if you click through and make a purchase. Community content is available under CC-BY-SA unless otherwise noted.