The Reverend Edwin "Teddy" Boston (20th August, 1924 - 1st April, 1986) was the former Rector of the Parish of Cadeby in Leicestershire. He was a good friend of the Reverend W. Awdry and in the Railway Series was known as The Fat Clergyman.

Born in Solihull, on the 20th of August 1924, Boston was educated at Gresham's School, Holt, and Jesus College, Cambridge, before training for the ministry at Lincoln Theological College. From 1949, Boston served as curate of Wisbech, Cambridgeshire. He became Rector of Cadeby and Vicar of Sutton Cheney, both in Leicestershire, in 1960, remaining in post until his death in 1986.

Boston first met Wilbert Awdry in 1949, while he was an undergraduate at Cambridge and the latter was Vicar of Elsworth. He had heard of Awdry's model railway from the local model shop and turned up at Elsworth Rectory, without warning, to see it; His enthusiasm was such that the two struck up an immediate friendship. On his first visit he watched Wilbert running Thomas alongside a new model, Percy. Boston would become a frequent visitor to Elsworth, helping to build the model railway and lending articles of rolling stock.

In May 1962, Boston bought a Bagnall saddle tank locomotive number 2090, named 'Pixie', and set about building a light railway in the grounds of the Rectory at Cadeby. U-shaped, with a total length of 110 yards, the line opened on 7 April 1963 and carried its first passengers a month later.

In 1967, Boston bought from Lilleshall Hall another narrow gauge locomotive, number 1695, which was an engine he had seen working a light railway at Lilleshall when he was young. After standing idle for twenty-seven years, it had been reported as 'rediscovered' in the Narrow Gauge News and was moved to Cadeby on 6 May 1967. There, 1695 was renamed 'The Terror', in reference to Psalm 91, "The Terror that walketh in darkness", as the engine was so hard to start that it could be dark before it was going.

Situated in the grounds at Cadeby was a large wooden shed which housed a very extensive OO gauge model railway depicting the pre-war Great Western Railway. It also contained a separate, smaller narrow gauge layout, a 4 mm scale, 12 mm gauge line based on the Isle of Man Railway. Latterly Boston also owned a canal narrowboat which had an N gauge model railway on board, narrow boats being an interest of his wife, Audrey.

Boston has been described as "a short, round, jolly man, much given to Anglo-Saxon language in times of stress, such as a close run race with his traction engine Fiery Elias". In his foreword to Font to Footplate, Rev. Awdry wrote: "In thinking of our Teddy it is important to realise that despite the impression that this book may seem to give, he was a Parish Priest first and a steam enthusiast second. He never forced religion on anyone; but his sincere faith and devotion was there for all to see, coupled with his impish sense of humour."

Teddy Boston has appeared as himself in the Railway Series under the nickname "The Fat Clergyman". He made his first appearance in Small Railway Engines, in which he and the Thin Clergyman (Wilbert's fictional counterpart) visit the Arlesdale Railway to take photographs of the engines. In Duke the Lost Engine, he joins the Thin Clergyman and the Small Controller in their search for Duke, and ends up being the one who discovers him, albeit by accident.

The Fat Clergyman has also appeared in Thomas & Friends, making his first appearance in the twentieth season episode Tit for Tat, reprising his Railway Series role. Since then, he has made a few cameo appearances in other episodes. He is voiced by Tom Stourton in both dubs. 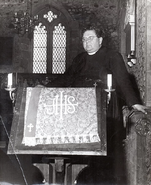 Teddy at the pulpit

Teddy Boston and his wife 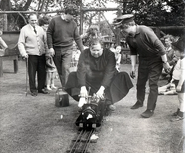 Retrieved from "https://ttte.fandom.com/wiki/Teddy_Boston?oldid=1774375"
*Disclosure: Some of the links above are affiliate links, meaning, at no additional cost to you, Fandom will earn a commission if you click through and make a purchase. Community content is available under CC-BY-SA unless otherwise noted.