“Hullo, are you playing Tank Engines? How sensible.”
―Thomas to Gordon

Thomas the Tank Engine
and Friends 8

Tenders and Turntables is a magazine story.

Henry and Gordon are feeling lonely after Thomas left to run his branchline. They have more work to do and have to fetch their own coaches which they did not like at all. James also grumbles about the extra work. Together, they are causing the Fat Controller a lot of trouble.

The big stations at the ends of the lines both have a turntable for tender engines to turn themselves around because it is dangerous for them to run fast backwards. Gordon thinks having a tender makes him important. After boasting to Thomas, Gordon heads backwards to the turntable. The turntable is in a windy place by the sea. Gordon has trouble positioning himself and puts the table out of balance. No matter how hard they try, they cannot make the table go round. At last, the fireman gives up and Gordon has no choice but to pull the next train backwards.

Some boys tease Gordon when he pulls into the station backwards with his train. Thomas cannot resist teasing Gordon. Even James laughs when he sees Gordon as he heads to the turntable. James stops in just the right place to balance the turntable, but it swings much too easily. James is sent spinning round and round as Gordon arrives just in time to see everything.

That night the three engines hold an indignation meeting and decide that their treatment is intolerable. They decide to go on strike. 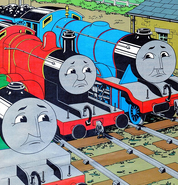 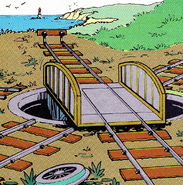 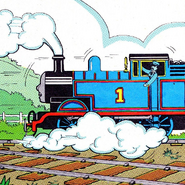 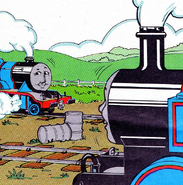 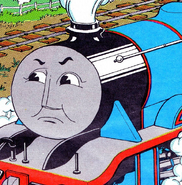 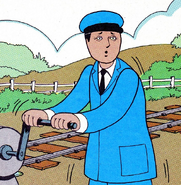 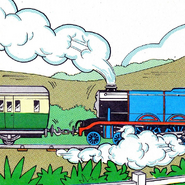 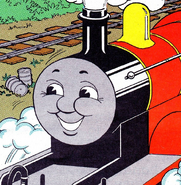 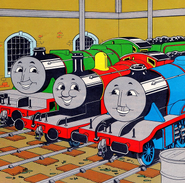 Add a photo to this gallery
Retrieved from "https://ttte.fandom.com/wiki/Tenders_and_Turntables_(magazine_story)?oldid=1662465"
*Disclosure: Some of the links above are affiliate links, meaning, at no additional cost to you, Fandom will earn a commission if you click through and make a purchase. Community content is available under CC-BY-SA unless otherwise noted.