“I'm going to be even naughtier and no one can stop me. He he!”
―Bill

Terrible Twins is a magazine story.

One day, BoCo is told to look after Bill while Ben is having his buffers mended. Bill vows to be even naughtier than his brother was when he had broken his buffers. Bill sees Percy next to a muddy puddle and decides to splash him. BoCo sees what Bill is about to do and rushes to stop him. Unfortunately, BoCo races through the muddy puddle and soaks Percy anyway. Later, Bill decides to wake Edward up with his whistle. BoCo notices this and blasts his horn to stop Bill. BoCo's horn wakes Edward with a start.

At the main station, BoCo worries about what the Fat Controller would say; after all, he has caused a lot of trouble today. Just then, Bill whizzes past and crashes into a set of buffers, damaging his own buffers. The Fat Controller is very cross with Bill, but is not cross at all with BoCo. He realises that the kindly Diesel was only trying to keep Bill out of trouble. Bill has to join Ben in having his buffers repaired. Bill decides that perhaps they should behave themselves from now on. Both Ben and BoCo quite agree. 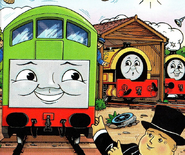 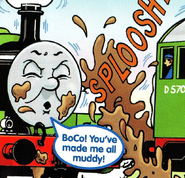 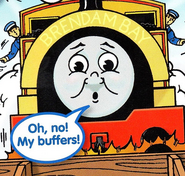 Add a photo to this gallery
Retrieved from "https://ttte.fandom.com/wiki/Terrible_Twins?oldid=1217918"
Community content is available under CC-BY-SA unless otherwise noted.