The Adventures of Thomas (planned film)

The Adventures of Thomas

The Adventures of Thomas was a planned theatrical Thomas & Friends film. According to director Shane Acker, the film was eventually cancelled after being pushed back several times following Mattel's acquisition of HIT Entertainment.[1]

The film would have taken place in London during World War II, and revolved around a pre-teen boy who has drifted apart from his father. The son is introduced into the world of Sodor, a place his father visited as a child but cannot remember. There is a bonding experience.

It has also been confirmed that it would have involved a Steam vs. Diesel confrontation.

The Steam Team, Diesel and Sir Topham Hatt were likely to appear. 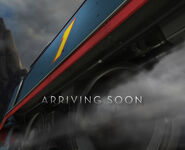 A test render of Thomas in the countryside

A test render of Thomas at a station