The Afternoon Tea Express is a Chinese DVD featuring five episodes from the seventeenth series. It was released under the title, Henry's Hero for Thai audiences.

Stephen becomes very excited when the Earl gives him the special job of collecting the ingredients for the afternoon teas at the Castle. But Spencer teases him about being too old and slow. Stephen, however, asks Thomas and the other engines to give him a push and he's soon speeding along. But when it's Spencer's turn to give Stephen a push he goes too fast, forcing Stephen to lose control and splatter jam all over the unsuspecting guests. Stephen learns that being steady and reliable is more important than being fast. 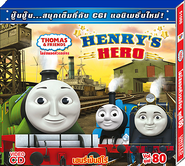 Thai VCD
*Disclosure: Some of the links above are affiliate links, meaning, at no additional cost to you, Fandom will earn a commission if you click through and make a purchase. Community content is available under CC-BY-SA unless otherwise noted.
Advertisement