“The Big Diesel is a big hero, after all!”
―Bill and Ben

The Big Hero is a magazine story.

The Diesel is so huge that he nearly squashes Bill and Ben as he rolls out of the shed. Just then, Henry rolls past with his log car and a log becomes loose and topples onto the track behind The Diesel. Henry is about to fetch a crane to move the log, but The Diesel has a better idea and he casually pushes the log aside with his buffers. Henry and the twins are pleased there will be no delays, but dislike The Diesel's seemingly endless boasting. Later, Bill and Ben are double-heading a train destined for Brendam Bay. When they arrive at the China Clay works, the two engines are shocked to see Lorry 1 and 2 being filled with their loads! They are trying to prove that they can get the job done faster. Soon, both Bill, Ben and the horrid lorries are racing along with their loads of china clay. Soon, the twins are having difficulties when they are reduced to the pace of a snail whilst going up a steep hill. Presently, The Diesel comes rolling along and the twins call out for his help and, although The Diesel doesn't generally like helping the steamies, there is no way he will let the roads beat the rails! So he pushes the twins up the hill and they speed past the lorries, arriving at the Harbour first. The future of their jobs are safe, all thanks to The Diesel. 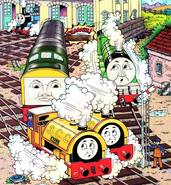 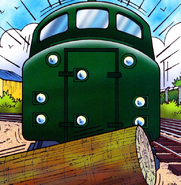 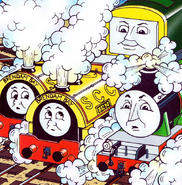 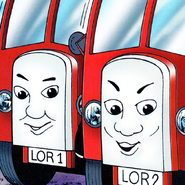 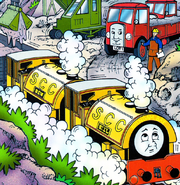 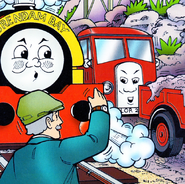 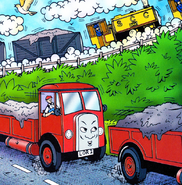 Add a photo to this gallery
Retrieved from "https://ttte.fandom.com/wiki/The_Big_Hero?oldid=1253120"
*Disclosure: Some of the links above are affiliate links, meaning, at no additional cost to you, Fandom will earn a commission if you click through and make a purchase. Community content is available under CC-BY-SA unless otherwise noted.