The Blue Engine Club is a magazine story.

One Sunday, Edward stops at a signal and spots a notice for the Sodor Ramblers Club stuck on a nearby telegraph pole. As Edward sets off again, he thinks the engines should have a club that a really sensible engine like him could be in charge of.

Later, in the yard, Edward asks Thomas to join his club for blue engines. Thomas thinks this is a great idea and suggests Gordon for membership, too. With that, Edward races away to find Gordon.

Edward finds Gordon at the main station and asks him to going their Blue Engine Club. Gordon wants to know what is in it for him and Edward says he will explain during a meeting at the turntable that night.

Later, Thomas meets James and tells him about the club. He says James cannot join because he is red, but James wants to know what is so special about the Blue Engine Club. Thomas says it will mean better things for blue engines and they are having a meeting to decide on those things.

That evening, Thomas and Edward are in the sheds facing Gordon on the turntable. Edward tells the others that they will greet each other with a "pip, pip" whenever they meet, but Gordon insists they "poop, poop" instead.

Suddenly, the floodlights come on and the Blue Engine Club are startled. A lot of engines have gathered around the sheds, even the Fat Controller has arrived and he had heard everything. He tells Edward, Thomas and Gordon that all he has heard is arguing and he is therefore banning their club. He vows that from now on, there will be no discrimination and all of the engines will be really useful whatever colour they are. 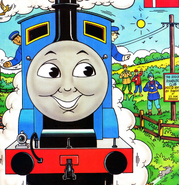 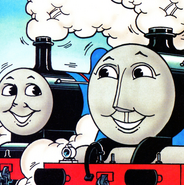 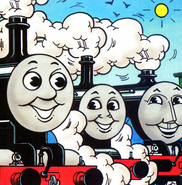 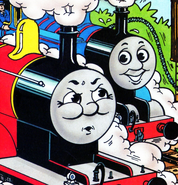 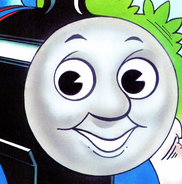 Add a photo to this gallery
Retrieved from "https://ttte.fandom.com/wiki/The_Blue_Engine_Club?oldid=1656529"
*Disclosure: Some of the links above are affiliate links, meaning, at no additional cost to you, Fandom will earn a commission if you click through and make a purchase. Community content is available under CC-BY-SA unless otherwise noted.