The Branch Line Bridge is a short metal truss bridge that carries Thomas' Branch Line over a road. It is surrounded by lots of bushes and trees. It only appeared in the second series.

Thomas on the bridge

The bridge erroneously depicted as being on the Brendam Branch Line

Percy on the bridge

Harold flying over the bridge

Daisy on the bridge 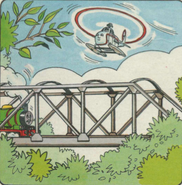 The bridge in a magazine story 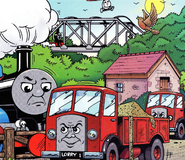 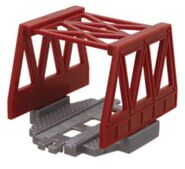 Capsule Plarail
Add a photo to this gallery

Ffarquhar Branch Line
* RWS only | ** T&F only
Retrieved from "https://ttte.fandom.com/wiki/The_Branch_Line_Bridge?oldid=1789172"
*Disclosure: Some of the links above are affiliate links, meaning, at no additional cost to you, Fandom will earn a commission if you click through and make a purchase. Community content is available under CC-BY-SA unless otherwise noted.