The Car-Train is a trackless train which carries holidaymakers up and down the promenade in special carriages coupled to a road-going unit designed like a steam engine.

George does not like the Car-Train as he believes a car should be a car and engines should be scrapped. Once, when the Car-Train broke down, George reluctantly stepped in to haul the packed carriages along his newly-made seafront cycle lane. After a while, George enjoyed the job.

The Car-Train does not have a face and, rather oddly, its driver is dressed in a railway driver's uniform. 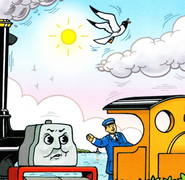 The Car-Train after breaking down 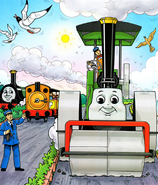 George and Emily with the Car-Train
Add a photo to this gallery
Non-rail vehicles
* RWS only | ** T&F only | *** Other Media only
Retrieved from "https://ttte.fandom.com/wiki/The_Car-Train?oldid=1619918"
*Disclosure: Some of the links above are affiliate links, meaning, at no additional cost to you, Fandom will earn a commission if you click through and make a purchase. Community content is available under CC-BY-SA unless otherwise noted.