The Coalbrookdale locomotive first appeared in The Railway Series: Surprise Packet, and in the 1979 annual. A replica appeared in Thomas and the U.K. Trip when Gachapin and Mukku were visiting several heritage railways and a Thomas & Friends Japanese documentary, Hashire! The "Thomas the Tank Engine and Friends" Steam Locomotive is Alive. 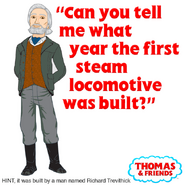 Magazines & Annuals
United Kingdom
* RWS only | ** T&F only
Retrieved from "https://ttte.fandom.com/wiki/The_Coalbrookdale_Locomotive?oldid=1686191"
Community content is available under CC-BY-SA unless otherwise noted.