The Colosseum (also known as the Flavian Ampitheatre) is a historic building in Rome. It first appear when Thomas and Gina passes the capital city.

When Thomas first visited Italy, he passed the Colosseum on his way to the Museum Station with Gina. She remarked that the building was previously used to hold chariot races by the ancient Romans.

Later, Lorenzo was asked to take the famous opera singer Dame Bella to the Colosseum, but ended up getting lost.

Lorenzo, Beppe and Gina
Add a photo to this gallery 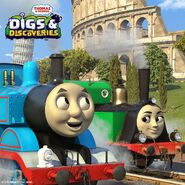 The Colosseum in real life
Add a photo to this gallery
Italy
Retrieved from "https://ttte.fandom.com/wiki/The_Colosseum?oldid=1738701"
*Disclosure: Some of the links above are affiliate links, meaning, at no additional cost to you, Fandom will earn a commission if you click through and make a purchase. Community content is available under CC-BY-SA unless otherwise noted.