The Complete Series 20 is a two-disc UK DVD set containing twenty-six out of the twenty-eight episodes from the twentieth series. A bonus disc of Extraordinary Engines is included for the six episodes in the DVD.

Series 20 delivers mischief and mayhem from Max and Monty, the Troublesome Trucks and strong-willed Daisy. There are woolly adventures and unlikely friendships, bickering brothers and an exciting new job for Henry. James continues to let his vanity get the better of him, Bert decides it’s payback time and Bradford gets off to a bad start. A storm blows in trouble for Skiff and Percy has a snowy problem while delivering letters to Santa but luckily the other engines are on track to lend their friends a helping hand. Join Thomas and his friends in all episodes from Series 20. 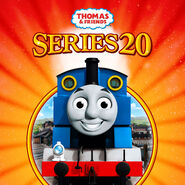 iTunes cover
Add a photo to this gallery

Bonus disc bonus features menu
Add a photo to this gallery
Retrieved from "https://ttte.fandom.com/wiki/The_Complete_Series_20?oldid=1758846"
*Disclosure: Some of the links above are affiliate links, meaning, at no additional cost to you, Fandom will earn a commission if you click through and make a purchase. Community content is available under CC-BY-SA unless otherwise noted.