The Difficult Bend is a stretch of railway line located near Kellsthorpe.

Thomas had trouble going through it in the past, but Annie and Clarabel helped him out by encouraging him to be careful. However, he had to take regular coaches through the bend while Annie and Clarabel were being repaired and they were not around to give him support. Because he was worrying so much, he derailed and crashed into some bushes. Thomas later overcame his fear when Edward's runaway train was going to crash into the new station, Kellsthorpe Road.

Thomas derailed at the bend 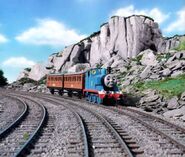 Add a photo to this gallery
North Western Railway
* RWS only | ** T&F only | --- Dropped
The Main Line
* RWS only | ** T&F only
Retrieved from "https://ttte.fandom.com/wiki/The_Difficult_Bend?oldid=1710006"
*Disclosure: Some of the links above are affiliate links, meaning, at no additional cost to you, Fandom will earn a commission if you click through and make a purchase. Community content is available under CC-BY-SA unless otherwise noted.