“You stick out like a sore thumb! Thank goodness we're not all red!”
―Henry

The End of the Rainbow!

The End of the Rainbow! is a magazine story.

One morning, James is being rude about Henry's green paint. He remarks that Henry must be hard to spot when he is travelling through the countryside. Henry snaps that James sticks out like a sore thumb with his red paint and is glad that not all engines are red. Henry puffs away, leaving James secretly concerned; is he too bright? Thomas and Gordon fit in nicely with the blue skies and even Diesel fits in with the coal yard, but where does James fit in?

James takes a row of old goods vans to the paint shop. When they come out, every one is a different colour. James is puzzled; he thought he was the attraction of the railway, not some colourful old vans. Then, the Fat Controller and a suited man arrive on board Henry. The man is impressed, but Henry is not. James insists that the colourful vans have nothing to do with him, but the Fat Controller tells him that they have everything to do with him. The suited man explains that he has opened a shop called "The End of the Rainbow" and once a week he wants bright red James to do a stock run from the harbour. With the colourful vans, James will be great for promoting the shop. 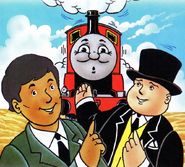 Add a photo to this gallery
Retrieved from "https://ttte.fandom.com/wiki/The_End_of_the_Rainbow!?oldid=1292688"
Community content is available under CC-BY-SA unless otherwise noted.