“Fancy a little tram engine joining such a grand parade!"
"You'll be right at the end!”
―Toby and James

The Engine Parade is a magazine story.

Later, Percy and Duck have shunted so many trucks in the yard that they think that their boilers will burst. Meanwhile, Gordon makes such good time with the express that he returns ahead of time. Even Bill and Ben haul extra loads of china clay and do not misbehave once.

The night before the parade, the engines are cleaned. Even Toby arrives from the quarry line to be cleaned. Toby is flattered to have been asked to join the parade, but James sneers and tells Toby that he will be right at the end. Toby does not mind; taking part is what matters. This makes the other engines feel bad for arguing, so they make an important decision. 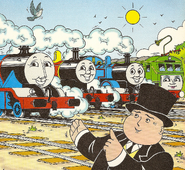 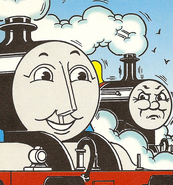 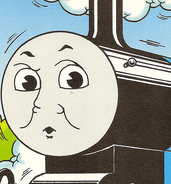 Henry, Thomas, and the Fat Controller 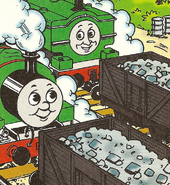 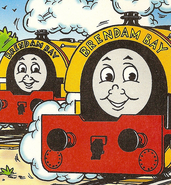 James, Thomas, and Toby
Add a photo to this gallery
Retrieved from "https://ttte.fandom.com/wiki/The_Engine_Parade!?oldid=1253915"
Community content is available under CC-BY-SA unless otherwise noted.