“Get out of the way now, cow!”
―Percy mistaking the lion for a cow

Thomas the Tank Engine
and Friends 51

The Escape is a magazine story.

One of Percy's favourite places is the big wildlife park. Sometimes he takes the train which stops at the park's halt. He loves seeing all of the animals, but is particularly fond of two giraffes named Gerald and Sally because he had made a special trip to bring them to the park. The park manager is good friends with Percy and they like to chat. Sometimes they chat for so long that Percy runs behind schedule, but he usually makes up time.

One day, when Percy stops at the halt, the park manager comes running over. He explains to Percy that he is to meet the chief of police as one of the park's animals has escaped. Percy asks which animal is missing and the manager tells him that it is a lion. The manager boards Percy's train and the little green engine hurries on his way.

They have not gone far when Percy approaches a bend. Ahead, he can see something on the track and as he slows to a stop, he can see it is the escaped lion. Percy nor his driver knows what to do, but the park manager does; they are used to the lion and do not get frightened. They shoot the lion with a special tranquilliser gun. When the lion was asleep, they lift it gently into the brake van. The guard is not happy, but the gamekeepers assure him it will be okay. Percy takes his passengers to their stations and then makes a special trip back to the park. 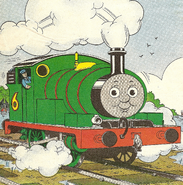 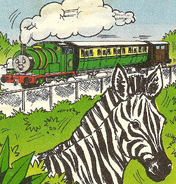 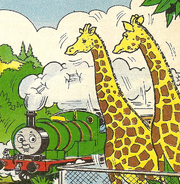 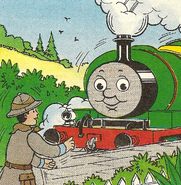 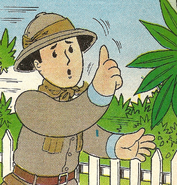 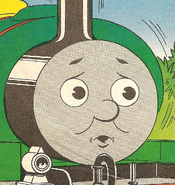 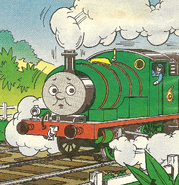 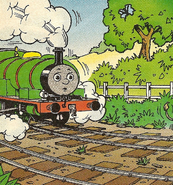 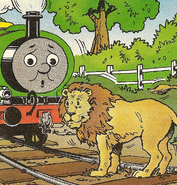 Add a photo to this gallery
Retrieved from "https://ttte.fandom.com/wiki/The_Escape?oldid=1465808"
*Disclosure: Some of the links above are affiliate links, meaning, at no additional cost to you, Fandom will earn a commission if you click through and make a purchase. Community content is available under CC-BY-SA unless otherwise noted.