South-west of Elsbridge, Island of Sodor

The Flooded Track is a line which got flooded because of the rain. Percy once puffed straight into it. It is located between Toryreck and Elsbridge.

Thomas asked Percy to take The Vicar of Knapford and his Sunday school home at evening. By the time they left, the rain was pouring so heavily the track near Elsbridge had flooded, sloshing Percy's firebox. Thankfully however, with some supplies from Harold and the floorboards from Clarabel, his firebox was kept alight and he made it to the next station.

Percy was taking Annie and Clarabel along The Country Line in heavy rain when he puffed straight into the flooded track. He lost his puff in it but soon regained it with the help of some wood planks from the guard's brake van. Harold also came and dropped down some warm drinks for Percy's driver and fireman before Percy puffed out of the flooded track. 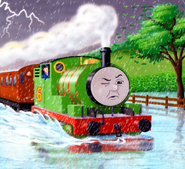 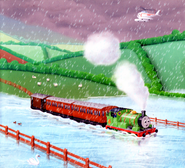 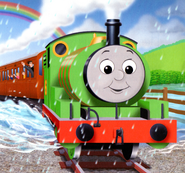 Add a photo to this gallery
Ffarquhar Branch Line
* RWS only | ** T&F only
Retrieved from "https://ttte.fandom.com/wiki/The_Flooded_Track?oldid=1722771"
*Disclosure: Some of the links above are affiliate links, meaning, at no additional cost to you, Fandom will earn a commission if you click through and make a purchase. Community content is available under CC-BY-SA unless otherwise noted.