“Flatten my funnel! Horses can fly, after all!”
―Percy

The Flying Horse is a magazine story, it was illustrated by using photographs from the television series.

One day, Percy asks Harold if he is going to the village fete. The helicopter wishes he could, but he is on patrol. As Harold lands at the airfield, he sees Pegasus the carthorse nearby, getting ready to give children rides at the fete. This makes Harold feel sad and now he wishes he could go to the fete more than ever.

Later on, as Harold finishes refuelling, his pilot receives an urgent call. He tells his helicopter that Pegasus is stuck in a ditch and if he is not rescued, the children will miss out on their rides. Harold then spots Percy approaching and decides that they can rescue the horse together.

Percy is confused by the horse's funny name, until the Fat Controller explains that he is named after a flying horse in an old story. Percy laughs; horses cannot fly. This gives Harold an idea. He decides to take Pegasus to the fete in his sling while Percy takes the cart. When Percy sees the horse flying through the sky, he is amazed to learn that apparently horses can fly after all. 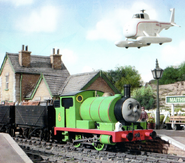 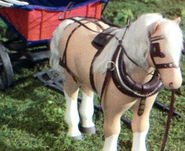 Add a photo to this gallery
Retrieved from "https://ttte.fandom.com/wiki/The_Flying_Horse?oldid=1730596"
*Disclosure: Some of the links above are affiliate links, meaning, at no additional cost to you, Fandom will earn a commission if you click through and make a purchase. Community content is available under CC-BY-SA unless otherwise noted.