The Flying Kipper and
Henry the Green Engine

Heinemann Young Books
The Flying Kipper and Henry the Green Engine is a pop-up book written by the Reverend W. Awdry and illustrated by Clive Spong.

Henry takes The Flying Kipper for the first time, but ice and snow cause trouble for him making him come off the rails. After being rescued, Henry is sent to Crewe to have a new shape and a larger firebox. 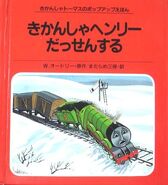 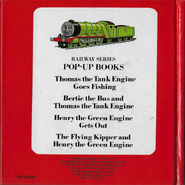 Add a photo to this gallery
Retrieved from "https://ttte.fandom.com/wiki/The_Flying_Kipper_and_Henry_the_Green_Engine?oldid=1966619"
*Disclosure: Some of the links above are affiliate links, meaning, at no additional cost to you, Fandom will earn a commission if you click through and make a purchase. Community content is available under CC-BY-SA unless otherwise noted.