The Friends of Sodor

The Friends of Sodor

Kikansha Thomas - Sodor tou no Nakamatachi (Japanese: きかんしゃトーマス ソドーとうのなかまたち, The Friends of Sodor translated in English) was a Game Boy Color game developed and published by Tamsoft, released as a Japanese exclusive. The game was only released in Japan on the 28th of September, 2001.

The player controls Thomas as they explore the different parts of Sodor. Along riding the track, the player comes across empty spaces where they have to pick the right track piece which fits. As they further explore, the player will meet different characters who will talk with Thomas or might give him a task. The tasks range from a number of mini-games which once completed allow the player to further continue. If the player fails, they must restart the level. There are four levels to start off which the player must complete each one in order. A final level (which is the town) is unlocked in the end. Other characters encountered are hidden which Thomas must use his whistle to reveal them.

The player can unlock small biographies of each character that they encounter. 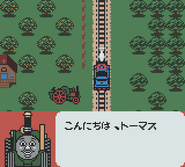 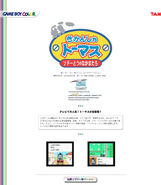