The Glow Train, also know as The Glow Engine, is a magazine story.

On his way back to the Yard, Thomas breaks down and is placed in an old siding. Whilst his crew go for help, Thomas sees a weird green glow that looks like eyes. When his crew return, they investigate Thomas' claims and find that the "eyes" are actually glow worms.

Later, after Thomas is repaired, the Fat Controller gives him the special job of taking a "nature watch" to the old siding to observe the special creatures. Just before Thomas sets off with his special carriage full of passengers, his driver lights Thomas' lamps - now he is a "glow engine"! 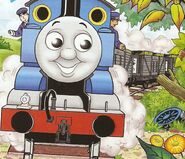 Add a photo to this gallery
Retrieved from "https://ttte.fandom.com/wiki/The_Glow_Train?oldid=1254766"
Community content is available under CC-BY-SA unless otherwise noted.