“Don't worry, my dear, I think I've got a solution."
"Topham! You can't be serious!”
―Sir Topham and Lady Hatt referring to the hot-air balloon

The Grand Opening is a magazine story, it was illustrated by using photographs from the television series.

The narrow gauge engines are helping to build a new track and station. One day, the Fat Controller announces that the new station's grand opening will be the following day. He tells the little engines that Lady Hatt and himself will be arriving at the new station in Harold. That moment, Skarloey puffs into the yard. The Fat Controller reprimands him for being late and tells him not to be late for the new station's grand opening. Skarloey, who is rather embarrassed, promises that he will not be late.

Next morning, Skarloey starts work extra early so that he will not be late. At the airfield, there is a big problem; Harold is having engine trouble and he cannot fly. Lady Hatt is very upset, but the Fat Controller has an idea and he points to a red hot-air balloon. Lady Hatt is horrified, but the Fat Controller convinces her. The couple climb into the balloon's basket and they start to rise into the air. Lady Hatt screams and turns pale, but she soon relaxes and starts to enjoy herself. Lady Hatt remarks that the new line looks splendid from the air, but Sir Topham Hatt is more concerned with Skarloey's whereabouts.

Down the track, Skarloey's trucks are still being loaded and he is fretting about being late. Suddenly, a gust of wind blows the hot-air balloon into a tree just in front of Skarloey. Sir Topham and Lady Hatt scramble out of the basket. Skarloey offers to take them both to the grand opening in time. Everyone cheers as Skarloey pulls into the new station. The Fat Controller declares the new station open and thanks Skarloey and admits that, maybe sometimes, really useful engines can be late. 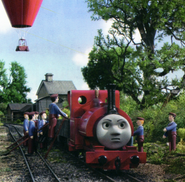 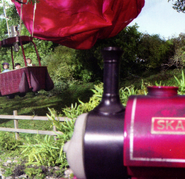 Add a photo to this gallery
Retrieved from "https://ttte.fandom.com/wiki/The_Grand_Opening_(magazine_story)?oldid=1769973"
*Disclosure: Some of the links above are affiliate links, meaning, at no additional cost to you, Fandom will earn a commission if you click through and make a purchase. Community content is available under CC-BY-SA unless otherwise noted.