The Great Race is a Golden Book based on the special of the same name.

One day, Thomas puffed into Vicarstown when he saw a shiny green engine next to him. Gordon told him that it was his brother, the Flying Scotsman. Scotsman told the two engines that he is going to the Great Railway Show on the Mainland, but he is not sure if any of the engines on Sodor will be going, Thomas was excited, and wanted to go. He later found Sir Topham Hatt and suggested that an engine with streamlining can be part of the Great Railway Show, with the controller saying that it was an excellent idea, and the engine that will be streamlined is Gordon, with Thomas being sad as that was not what he had in mind.

The next day, a railway ferry made a delivery to Brendam Docks, with Thomas excited to see the engines appearing out the boat. The Dock Manager asked one of the engines where they are heading off too, with Axel saying they were going to the Great Railway Show. The manager told them that it was not the mainland, so the engines jostled back onto the ferry. But just as that happened, a brightly coloured engine named Ashima bumped into Thomas when trying to get inside the departing ferry, and is dangling off the quay. The dockworkers and Ashima helped pull Thomas back onto the rails. She apologized for what happened, and asked Thomas if there was another way to get to the mainland, but the blue tank engine did not reply back and went away in a huff.

As he is puffing along his branchline with Annie and Clarabel, Thomas asks why Ashima gets to go to the Great Railway Show. Clarabel tells Thomas that it's because she is beautifully painted, to which Thomas says that any engine can get repainted. So he went to the Steamworks and asked Victor to repaint him. When Sir Topham Hatt stopped by to check on Gordon's streamlining, he liked the idea, but not Thomas's. Later that day, Thomas saw Ashima who didn't understand why Thomas wanted to be repainted, telling him that he can only be himself and that every engine is useful and has a job to do. She then asks Thomas if he is good at shunting cars, which gives Thomas his best idea yet: doing what he does best. But poor Thomas had an accident while shunting and ended up crashing into Norman. As a result, Percy had to do the shunting challenge in Thomas's place. On the day of the Great Railway Show, Thomas went to Vicarstown to see the engines off. Later, Victor had realized that Gordon's safety valve hadn't been reinstalled after his streamlining and that without it, he could overheat. So Thomas set off to the show with the valve.

By the time he had arrived, the race was already about to start leaving Thomas no time to give Gordon his safety valve back. As Gordon raced along, his face turned red and steam hissed from inside his streamlining until his boiler burst. The big engine was disqualified from the race. Later, a very scared Percy asked Thomas to be in the shunting challenge in his place, to which he agrees. After shunting round after round, he had beaten big engines from many countries. In the final round, only Ashima and Thomas were left. As they were about to finish shunting their trains, Thomas noticed a derailed truck stuck on Ashima's track, prompting him to change tracks and move it out of the way, leaving Ashima to win the race. At the awards ceremony, the judges had a surprise: Ashima won for being the fastest, and Thomas won for being a good sport, which left Sir Topham Hatt proud. Percy told the controller that Thomas was just being himself, with Thomas adding "You can only be you! There's nothing else you can possibly do!". 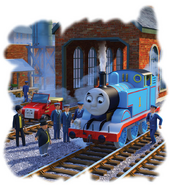 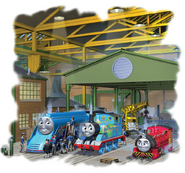 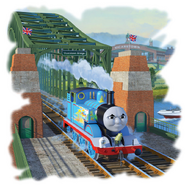