The Lifeboats reside at the newly constructed lifeboat station, near the pier on Duck's Branch Line, and are used to rescue people in trouble out at sea. Some sailors once dressed up as pirates in order to raise money for a new lifeboat.

The Lifeboats are based on Royal National Lifeboat Institution Tyne-class lifeboats. 9 of these lifeboats are still in service.

The Lifeboats cabs are painted orange, their sides are blue, and their hulls are red. They are lined in white. The RNLI logo is painted on their bows. 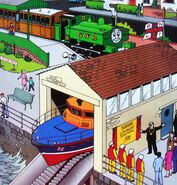 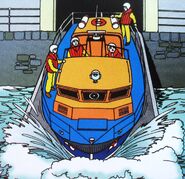 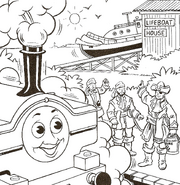 The Lifeboats' basis
Add a photo to this gallery
Non-rail vehicles
* RWS only | ** T&F only | *** Other Media only
Retrieved from "https://ttte.fandom.com/wiki/The_Lifeboats?oldid=1689040"
*Disclosure: Some of the links above are affiliate links, meaning, at no additional cost to you, Fandom will earn a commission if you click through and make a purchase. Community content is available under CC-BY-SA unless otherwise noted.