The Lion of Sodor (statue)

The Lion of Sodor

The Lion of Sodor is a very famous golden statue that all the older engines remember. A long time ago, it was broken, and years later, Thomas was sent to collect a new version of it. Due to not hearing about it before, Thomas mistook it for a real lion and tried to feed it. He then had to get it cleaned, so he took it to the wash-down and later to the Sodor Steamworks to be polished. Thomas then returned it back to Knapford, and the Mayor of Sodor gave a speech about it.

Gordon and Ferdinand later took the statue from Knapford to the Duke and Duchess of Boxford's Summer House for the summer.

It can now be seen on the roundabout at the road entrance to Knapford Station.

The statue covered in syrup, fish and straw

The statue getting cleaned up

The workmen polishing the statue

The Lion of Sodor at the road entrance to Knapford

The Lion of Sodor with the Logging Locos

The statue in the marsh

The statue after being recovered from the marsh 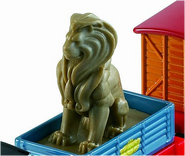 Take-n-Play
Español Polski
*Disclosure: Some of the links above are affiliate links, meaning, at no additional cost to you, Fandom will earn a commission if you click through and make a purchase. Community content is available under CC-BY-SA unless otherwise noted.
Advertisement