The Magic Railroad is a magical railway run by the magical engine, Lady, who in fact brings magic to everything on the Island of Sodor. It was featured only in Thomas and the Magic Railroad. To enter, the engines must travel through the Magic Buffers which are located west of Kirk Ronan and south of Cabalnoo.

The Magic Railroad is a portal between the universes of Shining Time Station and the Island of Sodor. Mr. Conductor and his family are in charge of this mystical line, and their source for gold dust is obtained through the proper running of the line. The land which the railroad runs through is colourful, bright, and of course magical. The tracks are a golden colour. Lady is a key player in the magic, for she recharges the line's magical energy. Without her, the line became a dark place, with a forest of thorns. Only when Lady finally returned did the line regain its brightness. If Lady had never returned, the line would have eventually faded out of existence, bringing both universes into extreme disorder.

Mr. Conductor and his family use the line as a means of transportation, and as a way to obtain more gold dust. Travel to either universe would have been impossible without gold dust or the lost engine.

The magic buffers, which are at each end of the line, are key players as well. Finding them on the Island of Sodor was not easy, but only when a coal truck went missing did Thomas discover where they were. Using them requires gold dust or an engine; engines such as Thomas or Lady have to charge at them without stopping or slowing down in order to pass through to the Magic Railroad. An interesting side effect of an inanimate object touching it, such as a Tumbleweed in the movie, gives the object some intelligence, and the ability to talk.

The buffers at the other end of the line are linked to Muffle Mountain, home to Lady's workshop and Burnett Stone. It is here the line takes a surprising twist, hurtling down the mountain, across a field, and then suddenly diving into another set of buffers. Billy Twofeathers' map of Indian Valley shows several mysterious shadowy lines, like straight railroad tracks, heading towards other places. These are indicated to be part of the Magic Railroad, so it can be assumed that the line branches off into either other universes or other parts of Indian Valley.

Lady's workshop is where she is stored when not in use. Burnett Stone can make repairs here, and the tracks leading out are obviously another buffer connection to the Magic Railroad.

A large mural in Shining Time with a railway tunnel is the only non buffer gateway into the Magic Railroad. Junior took Lily through the gateway, using gold dust, to get to Sodor in order to reach Mr. Conductor.

The original concept for the Magic Railroad was inspired by the famed "Ley Lines", a network of energy lines across the globe linking various historic structures and prominent landmarks. A theory is that the beginning of the lines are often magical and sacred, such as the Eight Wonders of the World or, for the Magic Railroad's sake, Muffle Mountain. [1] 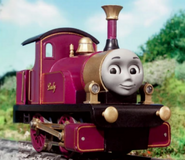 Lady
Kirk Ronan Branch Line
* RWS only | ** T&F only
Other Sudrian railways
* RWS only | ** T&F only
Shining Time Station
Русский
*Disclosure: Some of the links above are affiliate links, meaning, at no additional cost to you, Fandom will earn a commission if you click through and make a purchase. Community content is available under CC-BY-SA unless otherwise noted.
Advertisement